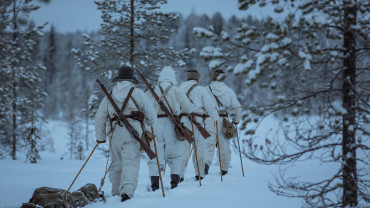 WSOY to publish a book on the making of UNKNOWN SOLDIER

WSOY to publish a book on the making of UNKNOWN SOLDIER

Jari Olavi Rantala’s book on the making of UNKNOWN SOLDIER film lets the reader take a peek behind the scenes of an exceptionally large-scale Finnish film production.

The book takes the reader on a behind-the-scenes journey to the making and filming locations of UNKNOWN SOLDIER, directed by Aku Louhimies. Abundantly illustrated, the book showcases an exceptionally large-scale Finnish film production, highlighting as protagonists not only the characters of “unknown soldiers” created by novelist Väinö Linna, but also the film crew. The book will be published on 3 October by WSOY.

Jari Olavi Rantala, who co-wrote the film with director Aku Louhimies, observed the shooting of the film from start to finish:

”Observing the whole filming process of UNKNOWN SOLDIER has been a unique experience for me as a screenwriter. I hope that this book will show film making from various points of view, on-camera and off-camera.”

”Väinö Linna is one of the greatest writers WSOY has published during Finland’s 100-year independence. As the home of the original Unknown Soldier novel, WSOY is thrilled to be a part of the story’s rebirth. New readers and generations deserve an interpretation of Unknown Soldier that reflects their time in the long-lasting continuum of the novel’s story.”

The shooting of Aku Louhimies’ big-budget film is finished

With its 7 million euro budget, Aku Louhimies’ UNKNOWN SOLDIER is the most expensive Finnish film ever produced. Shooting finished on 3 March 2017 in Vekarajärvi. The film also features other locations such as the surroundings of Kotka and Hamina, Forssa, Ristiina, Läsäkoski in Mikkeli, Koli, and Kainuu, as well as the Santahamina, Suomenlinna and central areas of Helsinki.

UNKNOWN SOLDIER will premiere in Finnish theatres on 27 October 2017. Tickets can now be purchased for preview screenings across Finland from 23 to 26 October 2017.